Home » Inverted nipples — what is it, how does it happen and how can plastic surgery help?

Inverted nipples — what is it, how does it happen and how can plastic surgery help?

We quite often hear the following questions during consultations and see them on social networks — what is the problem with me? or am I the only one with this problem? Can it be corrected and will I be able to breastfeed? Often these questions and complaints are seen in various women’s chatting portals, where due to a lack of experience and knowledge, comprehensive answers are not provided. We have also noticed that there is a rather limited amount of information available about inverted nipples, so this time we want to provide a broader insight into both this problem and the possible solutions. For many members of the fairer sex, this is not only a matter of lack of a sensitive touchpoint or erogenous zone, but also a problem of an aesthetic nature. For example, in one of the discussion portals, a young woman writes that “she does not feel satisfied with herself, because despite the beautiful breasts, the nipples have led to the development of a real complex”!

So what do these inverted nipples mean? How to recognise them and what is the cause?

An inverted nipple points inward or lies flat against the areola instead of pointing outwards. There are three known grades of inverted nipples. The first grade is a flat or slightly inward-facing nipple that rises easily when slightly irritated or as a result of a change in the environment (for example, in response to cold). The second grade is stated when the nipples are slightly more inverted, but can normally be pulled out manually (mechanical irritation, pulling or sucking out) and even remain in this condition for a while. In the case of the third grade, only the areola responds to the irritation and the nipple pulls in even further; it cannot be everted, even with manual manipulation. One woman may have only one inverted nipple, another one may have both nipples inverted. In any case, inverted nipples cause insecurity, an inability to fully enjoy intimate life, shyness, even among members of the same sex, health concerns, as well as physical limitations — problems or even the inability to breastfeed due to anatomical reasons. It is estimated that as many as 10-20% of women worldwide suffer from this problem. It should be noted that both women and men can have inverted nipples.

Why do inverted nipples develop — what are the causes?

Such anatomical feature can be congenital — it is one of the nipple types. Inverted nipples may result from relatively short or rigid (inelastic) ligaments along the milk ducts pulling the nipple inward. If you notice that your baby has inverted nipples, there is no cause for concern in the vast majority of cases. As the girl grows, the nipples may protrude, so it is recommended to only evaluate the situation after puberty. If we speak about an already grown woman with a persistent problem, we recommend you see a doctor for peace of mind.

This condition can also be acquired during life — as a result of ageing, various diseases and injuries, as well as infections (especially mastitis) and the breasts sagging. As a result of the ageing process, the nipple may flatten or retract very slowly and gradually, in which case these changes are not associated with malignancies (such as breast cancer).

Women over the age of 40 can develop a medical condition known as mammary duct ectasia, as a result of which the milk ducts widen, causing inflammatory changes around them, incl. accumulation of fluid in the chest. This process is often accompanied by redness and discharge from the nipple. Treatment at home may be recommended, but in more complex cases surgical intervention is required. After completion of the treatment, the nipple should take on its usual, natural shape.

Paget's disease, which causes inverted nipples, is a malignant but rare form of breast cancer. Additional symptoms include areola eczema, ulcers and itching. The appearance of inverted nipples may also be a symptom of other forms of breast cancer, such as carcinoma. Therefore, any changes in the chest should be carefully monitored — swelling, pain, discomfort, discharge, irritation, thickening of the skin, etc.

Regular breast examination is very important! If the nipples have been inverted since childhood, there is usually no need to worry! If your nipples suddenly become inverted, be sure to consult a doctor!

Can I breastfeed a baby with my inverted nipples?

Breastfeeding with inverted nipples is most often only possible in the case of the first two grades stated above. Many women succeed in breastfeeding, and often the baby, with their very regular, frequent and intense suckling, stretches the short ligament along the milk duct and it becomes longer and looser, which in turn allows the nipple to be nicely pulled out. However, some women should be aware that this process may be difficult and even impossible (especially in the case of the third grade), so if necessary, the advice of a midwife or breastfeeding consultant may be helpful — you can try specific manual stimulation techniques and different nipple shields. There is a variety of cases and individual peculiarities, so it is quite difficult to predict with 100% assurance whether a woman will be able to breastfeed, and it is also affected by the newborn's strength, determination and ability to grasp the nipple.

Is it possible to treat inverted nipples and, if so, how?

Inverted nipples that don’t appear due to a medical condition do not need to be treated. However, there are situations when, for aesthetic or emotional reasons, a woman wants to get “normal” nipples to raise her self-esteem and solve complexes that have put pressure on her for years.

If there is any doubt as to whether the inverted nipples are an anatomical feature, the doctor will examine the patient's medical history and perform diagnostic tests on the nipples. In case of suspicion, additional investigations will be carried out.

Young women, especially before the birth of children and with the first grade of inverted nipples, can be taught to use specific self-massage for the nipples.

Doctors sometimes use the nipple stretching method, putting a ring around the irritated and protruding nipple, for example made of specific sterilisers (similar to a patch).

There are different methods seen and used by people, e.g., when a piercing is used for the inverted nipple that physically and mechanically pulls the nipple outwards. We, doctors, do not recommend using this method for women prior to breastfeeding, because the piercing can damage the milk ducts at the ends of the breasts, cause severe atrophy and the inability to breastfeed in the future.

Is it possible to solve this problem with surgery?

In plastic surgery, we have several methods for the permanent correction of such a problem. The methods are chosen according to the inverted nipple’s grade: at the first grade, small incisions in the base of the extended nipple release the areola skin from the subcutaneous fascia. Then supports are created that hold the extended nipple, and the breast nipple is secured with threads. This method does not affect the milk ducts.

In the case of the second grade, in addition to the first method, the ligaments along the milk ducts are released. An additional fixation is also made inside the nipple itself.

In the case of the third grade, an additional retaining element is placed at the nipple (usually a small piece of cartilage from the earlobe, it is not visually noticeable), mechanically securing and holding the protruding nipple.

In the latter two methods, the milk ducts are affected, so these surgical adjustments are only made in the case that a new baby is not planned in the family and the breastfeeding of all children is completed.

Sometimes flat or slightly inverted nipples can also protrude as an additional bonus for breast augmentation with implants, as a result of filling of the empty tissues, the nipples get good support (in the form of an implant) at the bottom, preventing the areola and nipples from falling inwards.

Let’s mention the grades of inverted nipples once again:

The second grade of inverted nipples is stated when it is more difficult to make the nipples “go out” manually and they do not remain in this condition for an extended period of time. Breast-feeding is usually possible, but the baby may have difficulty grasping the nipple and may need to use some aids. The milk ducts are easily inverted, but they usually do not need to be cut to protrude the nipple. Most women have the second grade of inverted nipples.

The inverted nipples of the third grade do not respond to simple manipulations — by irritating the nipples, the areola rises, creating even deeper immersion of the nipples in the tissue. Surgical intervention is required in most of the cases, and the possibility of breastfeeding in general is very limited — the milk ducts are short and severely inverted. However, if you are able to breastfeed, the condition of the inverted nipples may improve slightly afterwards. If a woman has this grade of inverted nipples, she may also be more likely to experience various infections and rashes.

What does the surgery and postoperative period look like?

On average, it is a 1-hour surgery under local anaesthesia. You can return home on the same day. The recovery process in the case of nipple correction is relatively quick and easy — you can get back to work within a few days. After the surgery, transient swelling and bruising as well as temporary numbness may occur in the nipple area and areola.

Consultation with a plastic surgeon is necessary to choose the most appropriate solution for you. The surgery prices are determined depending on the complexity of the surgery. 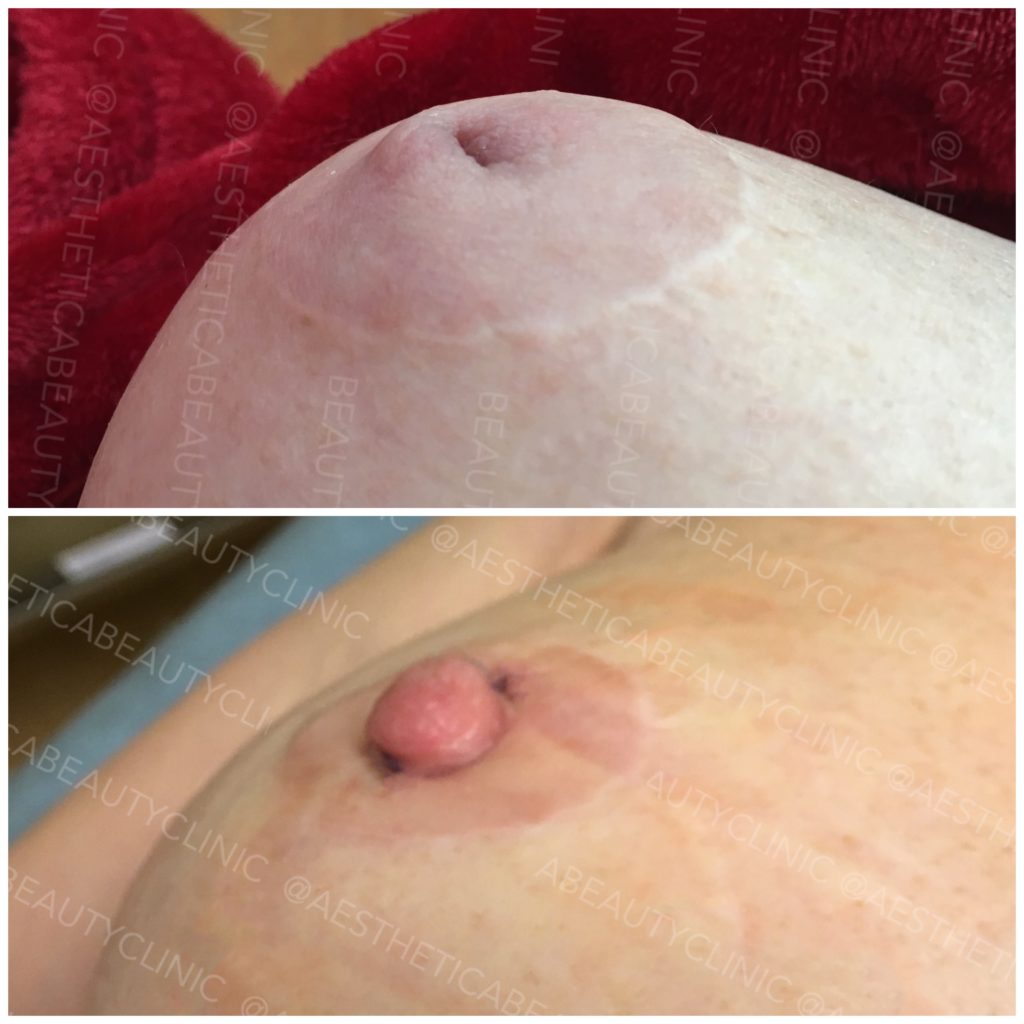 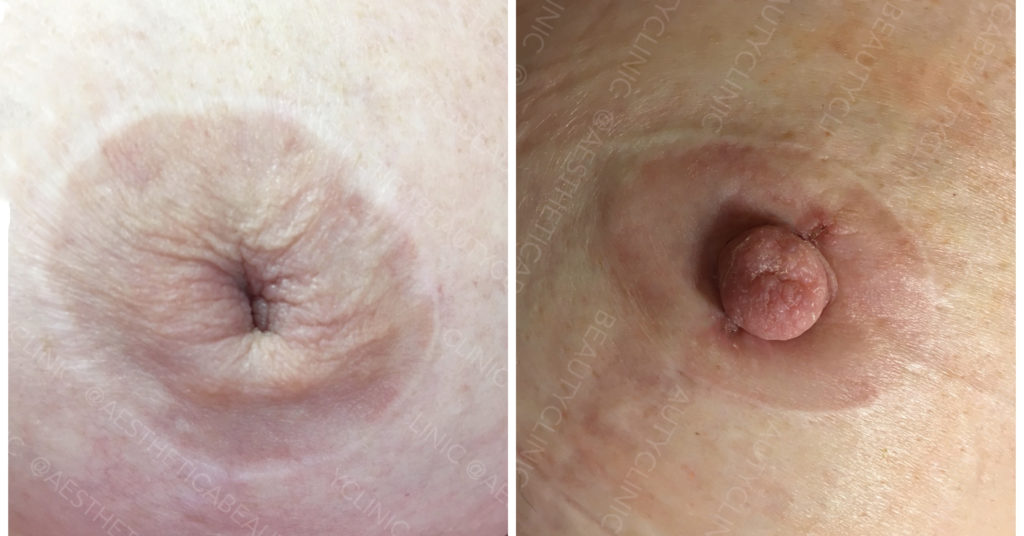 Why can a breast implant shift/rotate?
Read More » 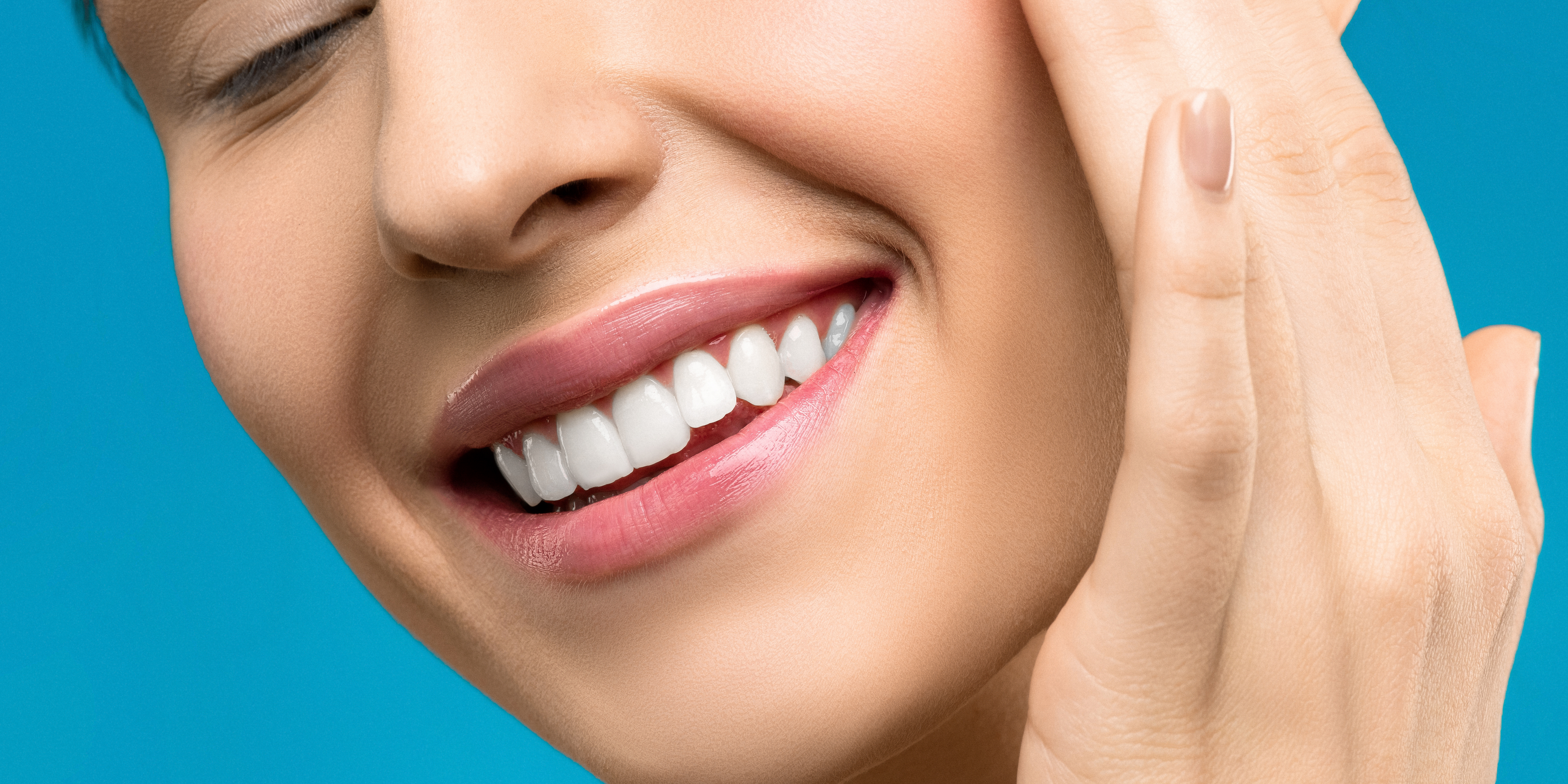 Breast Asymmetry — is this just my experience? The result BEFORE and AFTER the operation presented in pictures
Read More »